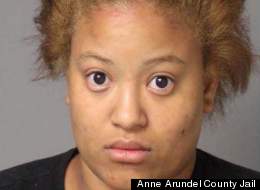 When Veronica Christina Victoriano got into a fight with her younger sister, she allegedly had more than sharp words — she also had a sharp knife.

Now she is behind bars after allegedly using that knife to stab her sister.

The stabbing victim, Victoriano’s 22-year-old sister, told police the argument was over who got to use their shared car. When the argument escalated, the suspect allegedly grabbed a knife and stabbed the victim, WUSA9.com reported.

Victoriano fled the scene but was apprehended a short time later, WBAL-TV reported. She was charged with first- and second-degree assault and reckless endangerment.

The victim was taken to a Baltimore hospital and treated for a non-life threatening stab wound to her lower extremity, Baltimore CBS reported.