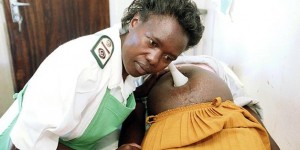 A hospital charges mothers-to-be $5 every time they scream while giving birth, according to an extensivenew report from Transparency International on corruption around the world.

It is not a joke, a local hospital in Zimbabwe has ‘$5 hospital screaming fee’, purportedly a charge for “raising false alarm” but clearly aimed at separating mothers from their money.

Zimbabwe, one of Africa’s poorest countries, has only $500 of gross domestic product per capita, average annual income per person is about $150.

Zimbabwean hospitals also charge a $50 delivery fee. This means that, in a country where underemployment is 95 percent and poverty is rife, a mother who screams a few times during delivery might owe half her annual income after giving birth.

According to a follow-up by Transparency International, women who can’t afford the high fees are sometimes detained at the hospital and charged interest until their family can pay up. As a result, many Zimbabwean mothers give birth at home because they can’t afford the charges. The United Nations reports that, on average, eight mothers die during childbirth every single day in Zimbabwe.

Transparency International says its Zimbabwe office contacted the national health ministry about the issue by sending, as such offices often require, a formal letter. The health ministry said it had received the letter, then apparently did nothing, and when the NGO followed up an official told the organization that they had lost the letter.

Finally, a member of Transparency International was able to meet with Zimbabwe’s deputy prime minister, who promised to look into. Since then, the NGO says, it’s heard no more complaints about screaming charges – although the $50 delivery charge, impossibly expensive for many in Zimbabwe, remains.