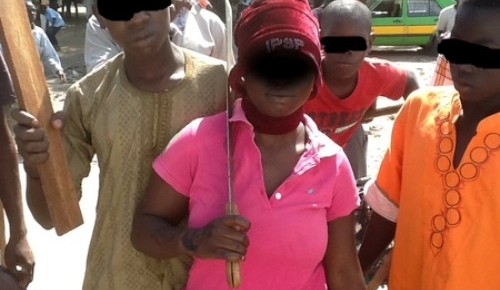 The fight against Boko Haram in Borno State has led to the creation of youth volunteer groups popularly called ‘Civilian JTF’ but what most do not know is that these groups have girls and women in their fold.

This development comes on the heels of reported cases of suspected Boko Haram members disguising as women or deploying women to help carry out their dastardly acts of terror.

The girls and women, who are between the ages of 15 and 30, wield swords, daggers, knives, sticks among other crude weapons.

They stop and search vehicles and pedestrians together with their male counterparts.

About ten of such girls were seen along Shehu Laminu way, with five sighted at West End roundabout and more than 25 at various checkpoints mounted by the “civilian JTF” along Baga road.

The ladies among the youth volunteers perform a body search of their womenfolk whenever a vehicle is stopped while the males check their men folk and after the vehicle is ‘certified’, the driver is giving the go-ahead to continue on his journey.

It was observed that both private and commercial vehicles were subjected to these searches even as the checkpoints mounted by the youths far outnumber that by security operatives.

A girl of about 17-years, who simply gave her name as Halima was seen around Ramat Square in Maiduguri metropolis, underscored the importance of having females among the ‘Civilian JTF’.

“We joined the civilian JTF in order to be searching females. A woman can search any other woman anywhere and nobody can raise eyebrows,” she said.

Putting up a brave front, Halima said she was not oblivious of the dangers of her involvement in the fight against insurgents because according to her, “Securing Maiduguri is now a collective responsibility, irrespective of age, gender or status; the safer the town, the better for all of us”.

Another girl, who identified herself as Saratu, said she left her job as a salesgirl in order to partake in the routine patrol conducted by civilians.