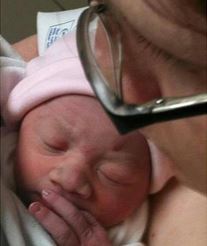 Two pregnant woman on the verge of giving birth were forced to evacuate their hospital when a bomb threat was called in — leading to both babies’ delivery in the parking lot.

Tessa Kilgore, 21, gave birth to a baby girl beneath an oak tree outside Alabama’s Walker Baptist Medical Center in Jasper Friday morning along with a second unknown woman among 76 patients evacuated by the terrifying scare.

Kilgore told the Mountain Eagle she had just started pushing in full labor when nurses notified her she had to leave.

“At first I didn’t know if I was supposed to push or not,” Kilgore said. “I was scared, especially when they put up the blankets around me, taking me to the parking lot.”

Tessa Kilgore, 21, and La’Darrick Babbs, 20, are Kylie’s proud parents who were whisked outside the delivery room minutes before she gave birth.

Once beneath the shade of a tree — with blankets held up around her — she gave birth 33 minutes later at 8:50 a.m. to a 5 pounds, 8 ounces baby girl she named Kylie.

“Everybody was clapping,” the new mom said of the patients’, nurses’ and doctors’ applause throughout the parking lot. “I think that’s what made me cry the most.”

The identity of the second new mom was not released with the delivery reported by the Jasper police department.

But as if a bomb threat wasn’t enough of an extra jolt to the 21-year-old new mom, the baby arrived seven days early.

“She would pick today to be born when all this was happening,” Kilgore said.

The Walker Baptist Medical Center reported 76 patients evacuated that morning after a bomb threat was called in. Just before noon they were given an all clear to safely return.

Both mom and baby were whisked away to the Alabama Outpatient Surgery Center by ambulance for evaluation soon after the delivery.

Just before noon the hospital was given an all clear to safely return.

Kilgore expressed her thanks to all the doctors and nurses who despite the turmoil stayed calm, she said, making her situation so much easier.

With most people preoccupied by the bomb threat, Tessa Kilgore gave birth under a shaded tree in the parking lot.

The hospital expressed its own thanks to the local community who helped them in their intense time of need.

“While a situation like this morning disrupted the lives of many, we are grateful to the many people who rallied together to ensure THEIR hospital and community remained safe and unharmed. The outpouring of response and support from the community was astonishing,” the hospital wrote on its Facebook wall.

Kilgore and baby were expected to be released Sunday night.