Horrifying video has emerged of two young men being pushed off a six metre high ledge and bashed by a mob in Egypt.

Britain’s Daily Mail reports that 19-year-old Hamada Badr was killed in the attack, which took place in the Sidi Jaber area of Alexandria last Friday.

Supporters of al-Qaeda and the Muslim Brotherhood have been blamed for the mob attacks. One of the men in the video appeared to be carrying a black and white al-Qaeda flag.

Relatives of Badr told local media that he and his friends had been celebrating the ousting of former President Mohammed Morsi, but had been set upon by Morsi supporters.

The mob chased the young men onto a ledge structure atop a terrace house. The mobile phone video shows two men being pushed off the ledge.

Tensions have grown between the anti-Morsi protesters and supporters of Morsi since the ousting of Morsi by the military last week. Supporters of Morsi have vowed never to stop their protests, even to the point of death, until Morsi is returned to his seat. 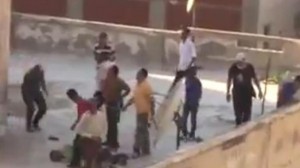 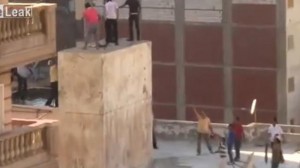 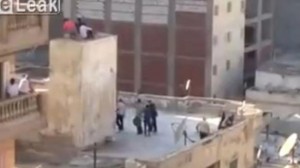