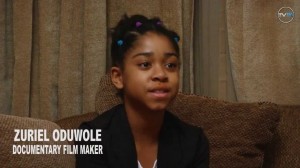 Zuriel Elise Oduwole is a 10 year old girl, but not just your regular 10-year-old.

The extraordinary Nigerian-American child has put her name down in the history and record books as the youngest person ever to be interviewed in Forbes.

The interview with the award winning documentary film maker, conference speaker and writer is featured in the August 2013 edition of Forbes Africa.

At the tender age 0f 10, Zuriel possesses an amazing talent that has elevated her to great heights. The 10 year old has sat face to face with renowned world leaders in interviews and one on one chat sessions.

She has sat with the current Presidents of Tanzania, Mauritius, and Malawi–one of Africa’s only two female national leaders. Others include ex-presidents Jerry John Rawlings and John Kufuor of Ghana. Zuriel has also had a one-on-one interview with Africa’s most successful businessman, Mr. Aliko Dangote. She even got a standing ovation for her sets of provoking and creatively intelligent questions to tennis superstars, Venus & Serena Williams, during their world press conference in Nigeria.

Zuriel says she has not been granted an interview by the President of Nigeria because of his busy schedules but hopes to achieve that soon.

Zuriel (which is Hebrew for God is my Rock) believes if she can walk a mile, then there are girls who on seeing her work and progress made, would walk a mile and half.