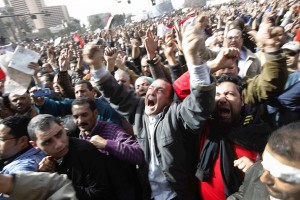 No fewer than 12 protesters and a policeman today died as thousands of Muslim Brotherhood supporters took to the streets in Egypt’s ‘Day of Rage’.

Violence was also reported elsewhere, with state media saying a policeman was killed in an armed attack on a Cairo checkpoint.

And security sources said clashes had broken out between Morsi loyalists and security forces in Tanta, north of the capital.

The protesters poured out of the mosques after Friday prayers, responding to the group’s call for a “Day of Rage” following the deaths of 638 people on Wednesday when riot police backed by armored vehicles, snipers and bulldozers smashed the two sit-ins in Cairo where Morsi’s supporters had been camped out for six weeks to demand his reinstatement.

Soldiers manned roadblocks on major thoroughfares, closing off some of them with armoured personnel carriers.

The government has authorised the use of deadly force against protesters targeting police and state institutions while the international community has urged both sides in Egypt to show restraint and end the turmoil engulfing the nation.

Earlier, Muslim Brotherhood spokesman Gehad al-Haddad wrote on his Twitter account: “Anti-coup rallies tomorrow will depart from all mosques of Cairo and head towards Ramsis square after (traditional Friday) prayer in ‘Friday of Anger’,”

It came as dramatic new video showed how an armoured police van rammed protesters and then plunged off a bridge during the violent crackdown in the capital.

The scenes happened during the deadly crackdown by Egypt’s interim government on supporters of ousted president Mohamed Morsi which sparked clashes that killed hundreds and drew international censure.

The death toll has soared too as turmoil spreads across the country, although the Muslim Brotherhood estimates the carnage at up to four times the number released by the health ministry.