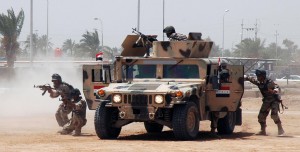 Gunmen have killed 12 Iraqi policemen and soldiers while a truck bomb hit a southern port.

In Saturday’s deadliest attack, gunmen opened fire on an army post in the town of Madain, just southeast of Baghdad, in a pre-dawn strike that left five soldiers dead and three others wounded, police and a medical source said.

Among the dead was a lieutenant colonel. The gunmen fled after the attack, and security forces, who cordoned off the scene, launched a manhunt.

North of Baghdad, militants shot dead four police who were buying ice near the city of Tikrit.

Security forces often purchase large blocks of ice to distribute to nearby checkpoints in order to cope with Iraq’s sweltering summer heat.

In another attack north of the capital, gunmen killed three soldiers in the restive Muqdadiyah area of Diyala province.

And in the far south, a truck rigged with explosives blew up in the parking lot of the port of Umm Qasr,
wounding three people and damaging a docked ship and several nearby trucks.

The port’s operations were not affected, however, a spokesman said.

No group immediately claimed responsibility for the attacks, but Sunni militants linked to al-Qaeda and opposed to the Shi’ite-led government frequently carry out attacks against security forces.

Attacks have killed more than 3480 people since the beginning of 2013, according to figures compiled by AFP.

Interior ministry spokesman Brigadier General Saad Maan said on Saturday that security forces had killed a top al-Qaeda militant in Tikrit and detained two of his aides.
He did not identify the man who was killed.