Four of the suspects were captured alive and are currently being detained at NNS Delta in Warri, Delta State.

Speaking to newsmen in Warri, Flag Officer Commanding, FOC, Central Naval Command, Rear Admiral Sidi-Ali Hassan said, the vessel with the product was recovered by naval personnel after a 30-minute gun battle with the oil thieves along the Forcados flank of the western Niger Delta.

The Nigerian Navy sent an emergency signal through the Flag Officer Commanding, FOC, Western Naval Command, Rear Admiral I.E. Ibas as soon as report of the hijack was made.

A security alarm was immediately declared and NNS ANDONI and NNS IKOT ABASI were dispatched to engage the bandits.

Also deployed were six other gunboats and NN vessels increment from NNS Delta in Warri and the Navy Operation Base in Egweama, Brass Island.

According to Rear Admiral Hassan, “8 NN vessels were used in pursuit of the hijacked MT Norte with 16 suspected pirates on board. The participating ships eventually shadowed the hijacked vessel and forced her back into Nigerian waters.”

“An agreed drop point was reached but the suspected militants refused to disembark as earlier agreed. They obviously were playing for time and darkness to set in. They finally agreed to disembark from MT Norte at 2045hrs on 17th of August 2013 on condition that only one NN vessel would remain in the vicinity of the MT Norte.

“A total of 16 militants disembarked from the MT Norte instead of 20 that were earlier claimed to be on board. The captain also confirmed that no other militant was left on board and no crewmember from MT Norte was taken hostage. After disembarking from the ship, the hijackers made a fast move towards the coastline,” he said. 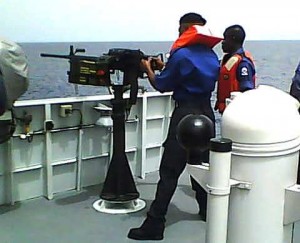 Hassan added, “Accordingly, NNS Badagry immediately engaged the boat in hot pursuit. Efforts to get the hijackers to stop and surrender proved abortive as they engage NNS Badagry in a gun battle.”

He disclosed that the gun battle lasted for about 30 minutes after which the pirates were overpowered by the NN gunboat.

“On taking over the speedboat, four of the militants were alive and unhurt while the rest of the pirates were killed in the cross fire. The four survivors, their belongings and three AK 47 rifles were recovered and brought on board NNS Badagry base,” he said.

Rear Admiral Usman said the survivors currently detained at the NNS Delta have made useful confession to the Navy in its investigation.

He said that the corpses of the sea-pirates were not recovered, as their boat sank because of the damage inflicted on it.

The FOC commended the coordinated nature of the response by the various participating units and commands of the Nigerian Navy as well as the outstanding performance of the Maritime Patrol Aircraft from the Nigerian Air Force, which gave impetus to efforts to keep the hijacked vessel under constant watch. [Vanguard]