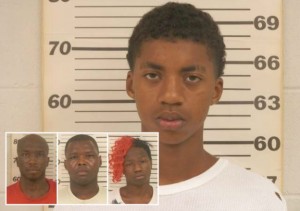 A Mississippi teenager has been accused of killing his father with the help of three accomplices–including a police officer, the Clarion-Ledger reports.

Kenneth Thompson, 53, was allegedly murder by his 14-year-old son, Blake Thompson, along withGreg Fortenberry, 26, and LeJerrious Perkins, 17, according to the Mississippi Bureau of Investigation, the agency that is leading the investigation. Each has been charged with murder, conspiracy to commit murder, arson and conspiracy to commit arson. Perkins and Fortenberry are being held on $500, 000 cash bond at the Pike County Jail, a representative told The Ledger.

Because 14-year-old Thompson is minor, the rep could not discuss his whereabouts. His nickname is “Black.”

All three suspects allegedly stabbed Thompson to death Sunday and took his black, Chevrolet Silverado extended cab pickup truck. They were seen later that day near the Wal-Mart near the city of Macomb. The victim’s sister-in-law, Lillian Mallard, said she believes that Thompson was lured by a phone call asking him to get his son. The teen had run away days ago, and his father had been looking for him.

After the alleged murder, the suspects secured the help of Brookhaven Police officer Jasper Pittman to help burn the truck and bury the body, criminal reports claim. Kenneth Thompson’s body was found in the back of Pittman’s house; the victim’s truck was found on a family member’s property.

Here is more on this story from The Ledger:

Pittman was charged with arson, conspiracy to commit arson and accessory after the fact (murder). He also was charged with sexual battery for having sexually penetrate(ed) … Blake Thompson, a child whose age was 14 at the time,” one of the affidavits states.

Pittman is 25. He is being held at the Amite County Jail on $400,000 cash bond. He was fired from the Brookhaven Police Department on Tuesday, said Chief Bobby Bell.He’d been employed there just two weeks, Bell said, and worked as a McComb police officer beforehand.

McComb Personnel Director Donjurea Davis confirmed Pittman had worked for the police department from March 30, 2012 through Feb. 22 of this year. She didn’t know why he left after just 11 months.

Mallard said she didn’t know the suspects and wasn’t sure why the younger Thompson associated with them, except that he was a troubled teen.

Thompson leaves behind three other children, including a 7-year-old daughter. The children’s mother had died five years ago.