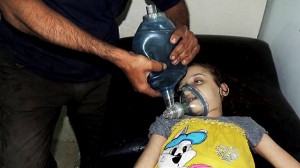 The US has intelligence showing that the Syrian regime of Bashar al-Assad was behind chemical attacks and the world must act to deter future chemical attacks, US Secretary of State John Kerry has said.

Mr Kerry said intelligence showed 1429 Syrians, including 426 children were killed in the August 21 attack. Syria shelled the area for four days and then tried to cover up the evidence, Mr Kerry said.

“History will judge us if we turn a blind eye,” Mr Kerry said, adding that while the US “believe in the UN”, the upcoming UN report will not assign responsibility for the toxic attacks.

US President Barack Obama, who met with top security aides overnight, will make a decision on intervention on his own timelime, and after consultation with Congress and the American people, said Mr Kerry.

Mr Kerry said any military intervention would be limited, and would not have “boots on the ground”, open ended or take responsibility for the civil war, taking pains to say it would be different from US action in Iraq, Afghanistan or Libya.

The US is committed to a diplomatic process, and there is “no military solution, it has to happen at the negotiating table and we are deeply committed ot getting there,” Mr Kerry said.

His comments came as Mr Obama met with national security aides over possible missile strikes on Syria, after the UK parliament shot down British plans to join military action.

The White House had signalled on Thursday that Mr Obama, guided by the “best interests” of the US, was ready to go it alone on Syria after deadly chemical weapons attacks last week.

But Russia, the Syrian regime’s most powerful ally, warned any military strikes would “deal a serious blow to the entire system of world order”.

UN arms experts on Friday began a final day of inspections of the sites of the suspected gas attacks. A UN spokesman said Thursday that the team had collected “considerable” evidence.

The team is due to leave the war-battered country Saturday and report back immediately to UN chief Ban Ki-moon, who has appealed to the West to allow time for their findings to be assessed.

UN Secretary-General Ban Ki-moon urged Western powers to hold off on any military action until the experts can present their findings to UN member states and the Security Council. Speaking in Vienna, Mr Ban said the UN team is to leave Syria on Saturday morning and will immediately report to him. He also said that he spoke to Mr Obama about ways to expedite the UN probe.

Some of the experts will take samples to laboratories in Europe after leaving Damascus, according to UN spokesman Farhan Haq, adding that the team’s final report will depend on the lab results and could take “more than days.”

The mandate of the UN team is to determine whether chemical agents were used in the attack, not who was responsible. But Haq suggested that evidence collected by investigators – including biological samples and interviews – might give an indication of who was behind the attack.

The US has already dispatched naval forces toward the eastern Mediterranean toward Syria’s shores. If Mr Obama decides on military action, US administration and defence officials in recent days have said the most likely move would be the launch of Tomahawk missiles off ships in the Mediterranean.