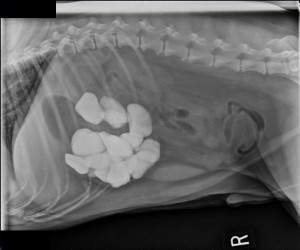 Gordon the golden retriever is somewhat of a rock star.

The 7-year-old pooch underwent surgery Wednesday to remove 16 rocks that he had eaten — weighing 1.79 lbs.

Gordon’s owner figures his pet chowed down on the river rocks in his garden and couldn’t explain why it would eat them when there’s always food available.

Dr. Jeff Yu, who performed the operation, also thought it was odd.

“You don’t see too many dogs that eat this many rocks usually,” Yu said. “Most dogs will stop after one or two, but Gordon certainly had quite the hankering for some rocks.”

Gordon is expected to make a full recovery.