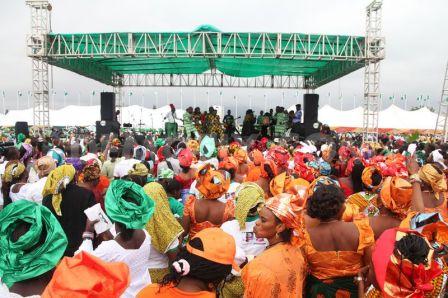 She told the News Agency of Nigeria (NAN) in Abuja on Monday that the era of using women for voting and dumping them must stop.

“Women constitute 50 per cent of the population of the country yet cannot be identified but remembered in the political circle for only clapping and shouting; we deserve more.

“We are not saying that the men should leave the stage for us, but we are only asking them to accommodate us; give us a little more space and let us be part of decision makers,’’ she said.

The woman leader said if given the chance, women had the capacity and potential to lead political parties for better results.

Ahaneku-Nwaneri, however, urged women to increase interest in elective positions, adding that parties too should support them to enable them to realise their determination.

She said that with the stand of President Goodluck Jonathan on women seeking elective positions, “it is now a priority for women to play important role in the political scene”.

“To show the importance of women in nation building and political stability, President Jonathan has instructed that there must be more women in the National Working Committee of PDP.’’

She challenged those in position of authority to take a cue from the president by reserving 35 per cent of all positions for women, especially the political appointees.

Ahaneku-Nwaneri said that PDP was working toward having more women in the legislative arm of government by 2015 to improve the current percentage in the National Assembly.

“This is not encouraging, it is very retrogressive and things must change. Women must henceforth seek larger role in politics ahead of 2015 elections.’’

The women leader identified religious misconceptions, financial incapability and intimidation, among others, as factors militating against effective participation of women in politics.

Ahaneku-Nwaneri said the time had come for men to acknowledge women’s contribution and dedication to political development of the country by giving them equal representation in key positions at the three tiers of government. (NAN)