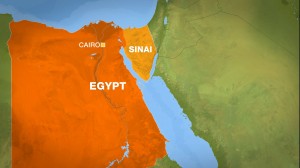 No fewer than 24 Egyptian police officers have been killed in a rocket-propelled grenade attack in northern Sinai, security officials say.

The Monday morning attack took place as the officers were driving through a village near the border town of Rafah in the volatile Sinai Peninsula.

At least two others were injured when unknown fighters fired on the officers’ buses as they headed towards Rafah on the border with the Palestinian Gaza Strip.

Egypt shut the Rafah border crossing after the deadly attack, a border official has told AFP news agency. Rafah is the sole crossing into the Gaza strip.

Last week, Egypt said it would close the crossing indefinitely, but it was partially reopened on Saturday, according to the Hamas-run Interior Ministry in Gaza.

Sinai has been witnessing almost daily attacks by suspected gunmen since the July 3 removal of President Mohammed Morsi in a military coup.

According to AFP news agency, at least 49 security officials have been killed in Sinai since July 5 not including those in the latest attack.

The army says it has killed nearly 70 “terrorists” in the region since July 3.

The attack was the deadliest in the Sinai in years, exceeding the toll from an August 2012 attack on Egyptian soldiers that killed 16.

The security situation in the Sinai Peninsula, which borders both Gaza and Israel, has deteriorated since 2011, when president Hosni Mubarak was overthrown.