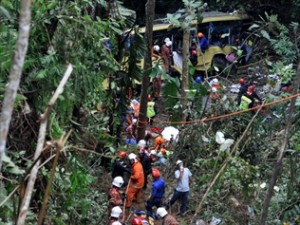 A passenger bus has plunged into a deep ravine while travelling downhill near a Malaysian highland resort, killing 33 people, an official said.

The bus, which fell about 60 metres into the ravine, was carrying mostly Malaysians and several tourists believed to be from the Middle East, Azizan said.

He said one body had been recovered from the bus, with 32 more bodies remaining inside the vehicle.

The cause of the accident was not known. The bus driver was among those believed killed, Azizan said.

More than 200 firefighters, police and medical officers used ropes and cranes to reach the bus, which had been heading to Kuala Lumpur, Malaysia’s main city.

Genting Highlands attracts thousands of domestic visitors and foreign tourists from Singapore, China and other countries every week. Serious accidents are rare on the relatively well-maintained roads leading to the area’s main resorts.