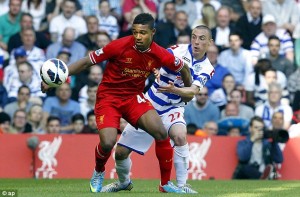 At just 17, he made a fine first impression with an assist for Phillippe Coutinho’s opener against Queens Park Rangers at the end of last season in his first ever game for Liverpool.

He possess great pace, energy, can also lay claim to a good first touch, slick dribbling, and decent finish. All the requisites for a Premier League winger. Although he may not get to start games for the Reds, expect to see the Nigerian born winger coming on for some few minutes in the second half as he continues to grow.

The midfielder has been capped twice for England at the Under-18 level, but is still eligible to play for Nigeria at any level by virtue of his Nigerian parents. 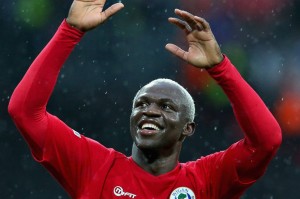 Arouna Kone was brought in to compete with Nikica Jelavic and fellow African Victor Anichebe for a starting role up front. The edge he has over Jelavic and Anichebe is that he can also play in a wide position, and this might be the option Martinez uses to get two of his strikers into his team, but the Ivorian was at his best for Wigan when played through the middle and it would be surprising if he did not play most of his football for Everton in that role.

Kone, 29, scored 13 goals for Wigan last season despite spending a month on duty with the Ivory Coast at the Africa Cup of Nations which is a very impressive record for a club like everton who have lacked a striker scoring double figures since Yakubu departed 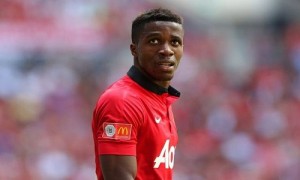 At 20 years old, the winger is still perhaps too raw to command a first-team spot straightaway, but one of David Moyes’ key challenges—and surely key ambitions—will be to polish the England international into a top-class Premier League competitor.

The youngster was one of the key factors in Crystal Palace’s return to the top flight, but at times last season it was clear that he had outgrown the Championship. He almost single-handedly won the playoff semi-final for Palace and was a key protagonist in the final victory over Watford.

While this season may predominantly be a question of acclimatisation, Zaha is already more than capable of making an impact in a substitute capacity.

Moyes will be hoping for much, much more before too long. 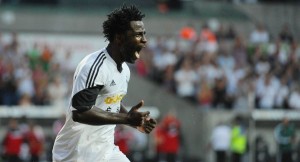 Having once been touted as the solution to Chelsea’s striking inadequacies, Swansea can be chuffed to have pulled off a coup in acquiring the Ivorian.

Bony promises goals, and Swans fans will be salivating at the thought of the former Vitesse man linking up with last season’s superstar Michu.

While the Spaniard took the EPL defences apart in his first season across the Channel, Bony was setting fire to the Eredivisie; he top-scored with 31 goals as he helped the Vitas qualify for the Europa League.

Bony is one of several players who will look to be headlining the post-Drogba era for the Cote d’Ivoire national side. Along with Seydou Doumbia and Lacina Traore, the Elephants boast some of the most devastating options on the continent.

Swansea fans are in for a treat.

It is no surprise that Kenyan midfielder Victor Wanyama has moved to a major European league, but I imagine few expected that Southampton would be lucky enough to acquire his services. Recall that the 21 year old came to lime light after his impressive display against Barcelona when Celtic shocked the Catalan giants in the Champions League 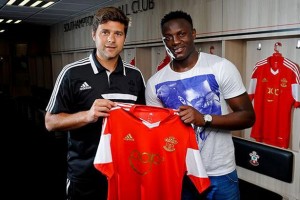 The Saints have picked up a valuable asset. The East African is a dynamic, energetic central midfielder, he can tackle, he can pass and he can also score goals, as was evidenced during Celtic’s magnificent run in the Champions League last season.

As noted by the Independent, Wanyama may have alerted the wider footballing public during those contests with Barcelona, but the truth is that he has regularly been dominating in the “bread and butter” contests of the Scottish Premier League week in and week out.

Certainly the EPL will be a step up, but expect Wanyama to make the grade next term. Look forward to the Kenyan forging a dynamic and effective partnership with Morgan Schneiderlin in the heart of Saints midfield.
I’m sure you enjoyed this article, if you did, feel free to drop a comment! Who will make the biggest impression?