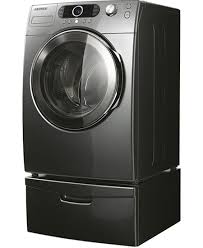 An 8-year-old boy was described as “clinging to life” after being found unconscious in a washing machine that failed to turn off.

The child’s father found the child’s legs and feet sticking out of the washing machineThursday in their home in Castaic, Calif., the Santa Clarity Valley Signal reports.

Deputies estimate that the child was alone for about twenty minutes, while his father was outside doing yard work and his mother was at the store, KTLA reports.

Neighbors described the boy as having special needs and as always helping around the house with chores, like laundry, CBS reports.

“His head was completely submerged inside the machine, with the water, and some clothing,” Sgt. Brian Hudson of the LA County Sheriff’s Department, told CBS. “It’s clear a load of laundry was being done. We did check the washing machine. We turned it on with the lid open and the agitator inside the washing machine remained working. Normally washing machines have a safety switch that would disable that and switch the machine off. It appears that was not happening in this case.”

“His parents are devastated,” Hudson said to the Santa Clarity Valley Signal. “Right now we’re treating it as a tragic home accident. There is no indication of foul play.”

When deputies arrived at the home, the boy was in “soaking clothes” on the floor in the living room with his father seated next to him, Hudson said.

The father had called 911 and the child was transported to a local hospital, where he was listed in critical but stable condition, City News Service reports.

Share
Facebook
Twitter
WhatsApp
Previous articleRoad Trips Affects the Quality of the Nigerian League- Eguma.
Next articleAccused Drunk Driver Nabbed After His Own Son Called Police To Arrest Him
- Advertisement -