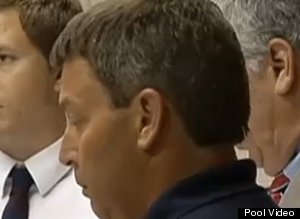 Connecticut police say a frightened 10-year-old boy called to say he was considering jumping from a car his father was driving while under the influence.

Police said 49-year-old Owen Gilman, of Warwick, R.I., hit another vehicle Wednesday night on Interstate 95 in Stonington. The unidentified motorist in the other vehicle was hospitalized. His condition wasn’t known Thursday.

Gilman was charged with reckless driving, driving under the influence of alcohol or drugs and other offenses. It wasn’t clear if Gilman has a lawyer. A telephone listing for Gilman couldn’t be found.

Rhode Island state police first got the call from the boy, who said he was with his 12-year-old sister.

The children were treated for lacerations.

Police said Gilman was uninjured and arrested when he failed a field sobriety test. He’s being held on $35,000 bond.