Senegalese striker Ibrahim Balde equalized for the home team midway through the second-half before Xandao drilled a rebound shot past the visitors’ goalkeeper Sergey Pesyakov.

Yura Movsisyan’s equaliser complimented Emenike’s first-half strike, after coming in for the Nigeria international in the 71st minute as Spartak remain level on ten points with Hansa Rostok, who defeated Rene Meulensteen’s Anzhi Makhachkala 1-0 on Friday.

Emenike, 26, increases his goal tally to three from four games, moreover, the Turkish club has been told by the Nigeria Football Federation (NFF) to release the Afcon 2013 goal hero for the August friendly between Nigeria and South Africa in Durban.

Reports suggest the Turkish side have opined the scheduled date is not a Fifa free day and may prevent the striker form honouring the friendly game for Africa’s foremost nationalist, Nelson Mandela.

The NFF are determined to counter any move by any of the foreign clubs to deny invited players the opportunity to grace the annual Mandela Challenge which should usher some of Eagles’ players back to international action after a brief hiatus.

Invited players are expected to arrive in South Africa on August 11 for the game which comes up on Wednesday 14. 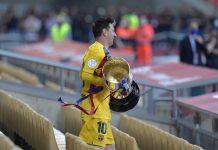