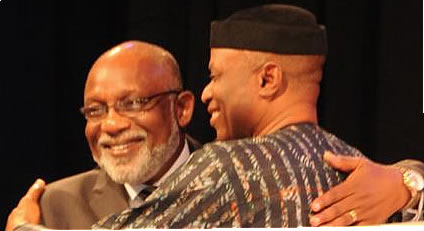 The defunct Action Congress of Nigeria (ACN) candidate in the October 20, 2012, Ondo State gubernatorial election, Oluwarotimi Akeredolu (SAN), has congratulated the Labour Party (LP) candidate and eventual winner of the elections, Governor Olusegun Mimiko, on his victory at the Supreme Court on Thursday.

The apex court had dismissed the appeal filed by Mr. Akeredolu and the Peoples Democratic Party’s candidate, Chief Olusola Oke; and upheld the lower court’s decision which declared Mr. Mimiko winner of the gubernatorial election in the state.

In a press statement released in Ibadan on Friday, Mr. Akeredolu, a former Nigerian Bar Association, NBA President, reiterated his earlier stance that the election was fraught with irregularities; but accepted the Supreme Court’s verdict.

“I ran for office because I’m concerned about Ondo State. This judgment puts paid, albeit for now, to my hopes to lead the State in a different direction,” he said.

See his statement below.

“The Supreme Court yesterday delivered its judgment dismissing my appeal against the decision of the Court of Appeal which upheld the earlier judgment of the Election Petition Tribunal.

“The judgment of the Supreme Court has helped a great deal in reaffirming my believe in what Clinton Rossiter said thus, “The people with their overt or silent resistance, not the court will set the only practical limit to arrogance of abuse.”

“Impelled by an undying belief in the democratic process, we were determined to prosecute this matter to its logical conclusion. We were, and are still, convinced without doubt that a heavily tainted process cannot produce a credible choice, the judgment of the Supreme Court notwithstanding. We stand by the prophetic words of Onnoghen JSC thus “There are certain non-compliances that go to the root of an election in that they are absolute in the sense that once established the purported election is invalid and as such there would be no result to be substantially affected by the non-compliance. For instance, where an election is conducted with an invalid Voters’ Register can there be a result of an Election to be substantially affected by the non-compliance? Obviously none as the purported election is null and void ab initio.”

“We believe that our intervention has enriched our jurisprudence in certain respects. We leave lawyers, judges, eminent scholars and members of the reading public to read the judgment of the Supreme Court with a view to sustaining the discourse.

“We never for once harbour any illusion on the arduous and tortuous itinerary to our democratic destination. We firmly believe in the justness of our cause and we tender no apologies to anyone who feels that we must be complacent and compliant faced with the harsh realities on the socio-political landscape.

“Once again, I thank all our supporters in Ondo State, especially those who have had to bear the brunt of the oppressive and callous charges of a vindictive and desperate government.

“I thank members of the press for the usual promptitude with which any news concerning us is treated. We remain partners in the struggle for the emancipation of the downtrodden.

“As Walter Mondale said in every defeat can be found the seeds of victory; it is the nature of politics and is proven by history. I ran for office because I’m concerned about Ondo State. This judgment puts paid, albeit for now, to my hopes to lead the State in a different direction.

“Betty (his wife) and I congratulate the Governor, Dr Rahaman Mimiko and earnestly pray for him and for our State.”