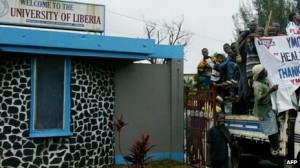 Liberia’s education minister says she finds it hard to believe that not a single candidate passed this year’s university admission exam.

Nearly 25,000 school-leavers failed the test for admission to the University of Liberia, one of two state-run universities.

The results mean there will be no freshers at west Africa’s oldest degree-granting institution, one of two state-run universities in Liberia, when it reopens its doors next month for another academic year.

The students lacked enthusiasm and did not have a basic grasp of English, a university official told the BBC.

Liberia is recovering from a brutal civil war that ended a decade ago.

President Ellen Johnson Sirleaf, a Nobel peace laureate, recently acknowledged that the education system is still in a “in a mess”, and much needed to be done improve it.

However, Education Minister Etmonia David-Tarpeh told the BBC Focus on Africa programme that she intended to meet university officials to discuss the issue.

“I know there are a lot of weaknesses in the schools but for a whole group of people to take exams and every single one of them to fail, I have my doubts about that,” Ms David-Tarpeh said.

Ms David-Tarpeh said she knew some of the students and the schools they attended.

“These are not just schools that will give people grades. I’d really like to see the results of the students,” she added.

University spokesman Momodu Getaweh told BBC Focus on Africa that the university stood by its decision, and it would not be swayed by “emotion”.

“In English, the mechanics of the language, they didn’t know anything about it. So the government has to do something,” he said.

“The war has ended 10 years ago now. We have to put that behind us and become realistic.”

The Voice of America (VOA) reported that the university hired a private consultant to manage and administer this year’s entrance exam.

The consultant, James Dorbor Jallah, told the VOA: “There is a perception in our society largely that once you take the University of Liberia admission exam, if you do not pay money to someone, or if you do not have appropriate connections, you would not be placed on the results list. So, the university has been grappling with how they could manage the process whereby people’s abilities would be truly measured on the basis of their performance in the examination.”

Liberia could draw a lesson from the mass failure, he added. “For the country as a whole, I think this is a clarion call that we need to all see that the king is moving around naked and not pretend as though the emperor has his finest clothes on.”