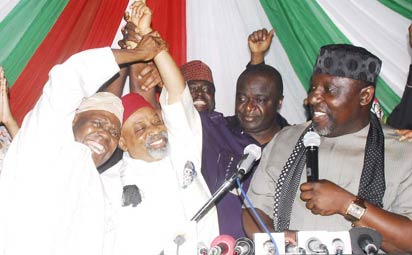 Contrary to reports that Senator Chris Ngige has emerged as consensus candidate of the All Progressives Congress (APC) for the November 16, 2013, gubernatorial election in Anambra State, an aspirant, Mr Godwin Ezeemo, has refuted claims that he stepped down for the Senator.

He also stressed that no consensus candidate had emerged for the APC.

Speaking on the purported stepping down for Chris Ngige, Ezeemo said: “I have not stepped down for anybody and will never do that. I have always believed in free and fair contest where the best candidate will emerge.

“I want to state unequivocally that I am still in the race for Anambra Governorship under the platform of All Progressives Congress; a party I and other well meaning Anambra people worked hard to build. The rumour making the rounds that Chris Ngige has emerged the flag bearer of the All Progressives Congress in the November 16 Anambra election is baseless and unfounded.

“The attempt to impose a candidate on Anambra people is a deceptive ploy by Rochas Okorocha who is battling to have a sound footing in APC in his own state Imo State. Those who do not want to go to the polls to test their popularity and want to take power through the back doors are clearly scared of my pedigree. I challenge them to the contest before Anambra people who have the ultimate right and final say on who governs them.”

Stating the importance of upholding internal democracy in the newly formed APC, the guber aspirant said “I have a very firm belief that a free and fair primaries for the purpose of electing a flag bearer for our great party All Progressives Congress in the forth coming Anambra governorship elections will make our party stronger.”

Ezeemo noted that APC was formed to wrest power from the Peoples Democratic Party (PDP) and correct the several wrongs it had unleashed on Nigerians since the inception of this political dispensation.

“Therefore, anything that creates doubt about the sincerity of that avowed principle in the minds of the party faithful certainly does not portend good for our great party. I stand for free, fair and credible primaries. No more, no less,” he said.