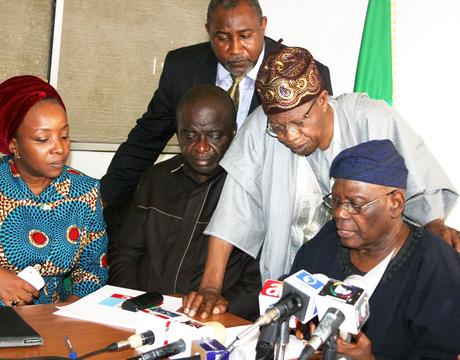 The establishment of State Harmonisation Committees (SHC) has been approved by the National Interim Executive of the All Progressives Congress (APC), the News Agency of Nigeria reports.

APC, in a statement on Sunday signed by its Interim National Publicity Secretary, Alhaji Lai Mohammed, said the committees would regulate activities of the party at the state level and the Federal Capital Territory.

The party said the decision to set up the committees followed the adoption of the report of the Aminu Bello Masari Committee by the National Interim Executive in Abuja.

It said the committee comprised of former presidents and vice presidents, governors and deputy governors, Senators and members of House of Representatives, as well as Speakers and Minority Leaders of State Houses of Assembly who were members of parties that fused into the APC.

Also included as members were serving and past ministers, immediate past National Executive members, gubernatorial candidates and their running mates, who were members of the parties that formed the APC.

According to the statement, in any state where the party does not have an incumbent governor that was a member of the coalition parties, nine persons, comprising of three elders, three youths and three women selected from the three Senatorial Districts, State Chairmen and the Secretaries of the legacy Parties, members of the National Interim Executive and Federal Commissioners who were members of the party, would be co-opted as members.