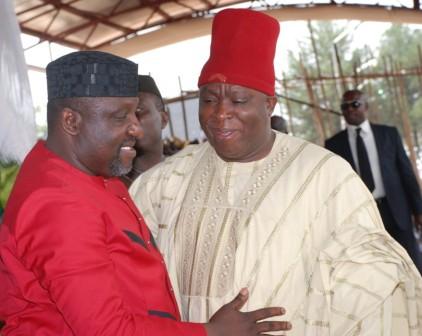 This position was made known by National Chairman of APGA, Chief Victor Umeh in an interview with Saturday PUNCH in Abuja on Friday.

Umeh said the party would be relying on the Supreme Court judgment in Rotimi Amaechi vs Celestine Omehia and the Peoples Democratic Party, which decided in a landmark ruling that the electorate voted for a political party and not individuals.

He said, “Okorocha’s case is entirely a different thing and the party has suspended him for his actions and despite the statements by his aides and his deputy that they are in the APC for good. We are waiting for him to make a formal declaration on joining the APC.

“If he does that, APGA will take him to court seeking a declaration that his seat becomes vacant. In doing that, we shall be relying on the Supreme Court authority in the case of Rotimi Amaechi vs Celestine Omehia and the PDP, where the Supreme Court emphatically stated in the judgment that the electorate voted for the party and not the candidate.”

Asked whether the governor was risking expulsion, the APGA chairman said, “The choice is his,” adding, “ordinarily, we won’t like to expel a governor that was elected through our platform.”