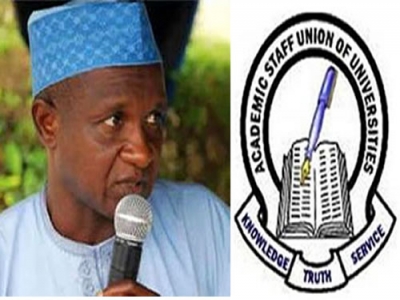 The threat by the Government to implement its ‘no-work, no-pay’ policy has been described as an ‘obsolete familiar threat’ that will not stop the ongoing strike by the Academic Staff Union of Universities (ASUU).

ASUU in a press statement yesterday, titled, “ASUU: On Government’s Threat of No-Work, No-Pay”, signed by its chairman, University of Ibadan (UI) chapter, Dr Olusegun Ajiboye, said members of the union have resolved to pursue the strike to a logical conclusion.

The statement said ASUU members are using the action to defend the integrity of the university system in Nigeria and save it from universal mockery.

Dr Ajiboye said the minimum funding requirement for public universities this year is N500 billion and not N100 billion, as being bandied around by the Federal Government.

He warned that the union would resist anything short of N500 billion.

According to Dr. Ajiboye, the Federal Government’s offer of N100 billion appears to show that government “is just begging the matter”, because it is like a drop in the ocean.

Vowing to continue the strike in the face of blackmail and coercion using no-work, no-pay, Dr. Ajiboye added, “The academics remain resolute on this struggle”.

He added: “Going by the ASUU agreement of 2009 and the Memorandum of Agreement (MoU) signed by the Federal Government in January 2013, the minimum funding requirement for the universities as at 2013 is N500 billion and not N100 billion. Only the provision of this will meet the immediate needs of addressing the rot and decay in the public universities. Anything short of this is not acceptable to the union.

“Therefore, rather than engage in cheap blackmail and unworkable threat, the government should address the issues on the table.”