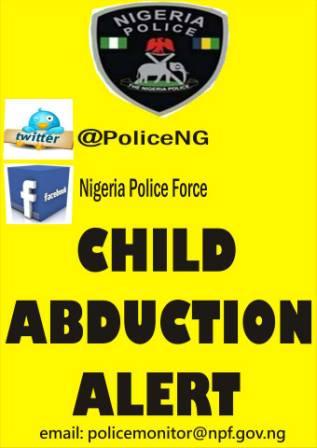 The reported cases of missing babies in the country have forced the Nigeria Police headquarters in Abuja to issue a Child Abduction Alert.

“On 25.08.2013 at about 8:00PM a Mother (name withheld), resident of MASAKA TOWN, NASARAWA STATE reported to the Police that at about 8:00AM of same day she handed her one-month old baby boy (name withheld) to an unknown woman to help in briefly attending to the baby while a service was on going at Living Faith Church, Goshen City, NASARAWA STATE. Incidentally, the unknown woman disappeared with the baby and all efforts to trace the woman have so far proved abortive,” Mba said.

He stated that while State CID Lafia is investigating the case, efforts have been intensified to apprehend the suspect and recover the child.

The second incident of child abduction according to the Police image maker happened on 19 August, 2013, when a suspect was apprehended trying to escape into the bush with a two-month old baby boy that she had allegedly stolen from the parent’s house in Umuozuo Village in Abia State while the baby’s mother was busy in the kitchen.

The female suspect – Chinenye Godwin – was accosted at about 10:00 a.m. inside the bush and when she could not provide satisfactory answers as to the origin of the baby in her possession, was ‘badly beaten’ before being handed over to the Police.

Mba said, “The earlier stolen and now recovered baby has safely been reunited with its mother by the Police. The suspect, who is now in the Police custody, is undergoing investigation at the State CID Umuahia.