Researchers have reported the first case of human-to-human transmission of the new strain of bird flu that has emerged in China. 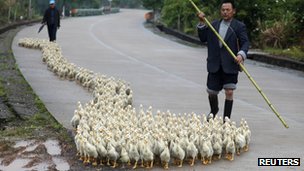 The British Medical Journal said a 32-year-old woman was infected after caring for her father. Both later died.

Until now there had been no evidence of anyone catching the H7N9 virus other than after direct contact with birds.

But experts stressed it does not mean the virus has developed the ability to spread easily between humans.

Most people had visited live poultry markets or had close contact with live poultry in the week or two before they became ill.

Yet researchers found that the 32-year-old woman had become infected in March after caring for her 60-year-old father in hospital. Unlike her father – who had visited a poultry market in the week before falling ill – she had no known exposure to live poultry but fell ill six days after her last contact with him.