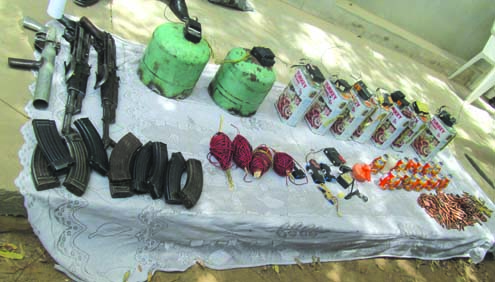 Luck ran out on a suspected Boko Haram member who specializes in manufacturing and planting bombs for the sect as he was arrested in Maiduguri, Borno State, by the Vigilance Youths Group (VYG) otherwise known as “Civilian JTF” yesterday.

The suspect, identified as Bula Modu, who was handed over to the Joint Task Force, JTF, in the state, was said to have fled to Lagos few days after he planted the last bomb that went off in Maiduguri in May, this year.

According to one of the vigilantes, “He was just back from Lagos, carrying his travelling bag which contained some new clothes, shoes and caps for Eid-el fitr Sallah celebration when we caught him”.

Wary of his return as some form of normalcy is gradually returning to the violence-torn state, the suspect upon interrogation confessed that he only came back home to celebrate Sallah.

“It is Allah that brought Bula Modu back to Maiduguri at this hot moment when things changed against the Boko Haram sect,” a trader Babagana Umara recalled.