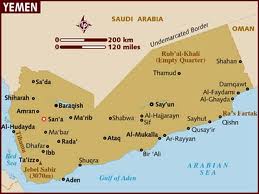 Britain has issued the highest possible security alert to British shipping companies operating off the coast of Yemen, an expert says, amid a worldwide terror alert focused on the country.

Neil Roberts, a senior insurance underwriter at Lloyd’s Market Association, said the Department for Transport had issued a “level three” warning about Yemen on Monday.

Under the International Ship and Port Facility Security (ISPS) code, level three is “exceptional”, suggesting a “probable or imminent risk of a security incident”.

Insurers have listed Yemen as a high-risk area for at least the last five years, requiring shipping companies to alert their underwriters before they head to the country.

But Roberts said that the government advice suggested a more pressing threat.

“They have put it at security level three, which is unusual,” he said on Tuesday.

“This is a wake-up call for British shipowners that the risk has increased significantly.”

Meanwhile, the United States has evacuated 75 embassy staff from the Yemeni capital, after both the US and United Kingdom told their citizens to leave due to the threat of “terrorist attacks.”

The US citizens were flown out of the country on military aircraft on Tuesday, according to the Pentagon, which declined to comment further, citing security concerns.

The new US measures, announced in a statement on Tuesday, followed a heightened security warning from Washington on Friday that prompted the closure of several Western embassies in Yemen and several US missions across the Middle East and Africa.

It also came after at least four suspected al-Qaeda members were killed in what local tribal leaders said was a US drone strike in central Yemen early on Tuesday.

“The Department urges US citizens to defer travel to Yemen and those US citizens currently living in Yemen to depart immediately,” the statement posted on its website said.

The UK’s foreign office, meanwhile, advised against all travel to Yemen, and “strongly urge[d] British nationals to leave now”. It said that all British embassy staff had been temporarily withdrawn from the country.

Italy also urged its citizens to leave, citing the “particularly high risk of kidnap,” while the UN’s refugee agency boosted security, though it did not withdraw its personnel.

Tuesday’s warning came after US media reports indicated that the increased threat levels were the result of what US intelligence officials said were intercepted communications between top al-Qaeda leaders.
The New York Times reported on Monday that the closure of the embassies was the result of intercepted electronic communications between Ayman al-Zawahri, who replaced Osama bin Laden as head of al-Qaeda, and Nasser al-Wuhayshi, the head of Yemen-based affiliate al-Qaeda in the Arabian Peninsula (AQAP).

US sources said that while some type of message between Zawahri and AQAP was intercepted recently, there were also other streams of intelligence that contributed to the security alert, which was prompted by a threat from AQAP.

“The threat picture is based on a broad range of reporting, there is no smoking gun in this threat picture,” a US official told the Reuters news agency on condition of anonymity.

US officials said there was still no information about a specific target or location of a potential attack, but the threat to Western interests had not diminished.