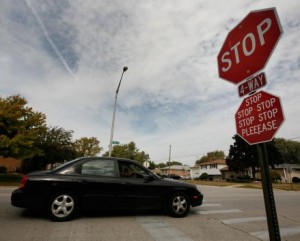 Fifteen minutes after Alex Walden and her boyfriend, Ryan Tippetts reported her car stolen, the Jetta reappeared and stopped for them at a crosswalk.

As the Boulder, Colorado couple crossed the street, Walden noticed her soccer ball in the back seat and realized it was her car.

“I asked him what he was doing and he said, ‘I’m trying to let ya’ll cross the street,'” Walden said. “He didn’t realize who we were and I told him to get out of my car.”

But the suspected thief in the driver’s seat, former University of Colorado running back Davien Payne, refused.

According to the police report, Tippetts dove into the passenger side window and climbed over a woman to fight for control of the wheel.

Police arrived within a minute of Payne getting out of the car and making a run for it, and apprehended him in a nearby alley.

Tippetts took some 20 punches to the face and throat and suffered a broken larynx. Six titanium plates with screws were required to repair his throat.

“I should be totally fine,” Tippetts said, in good spirits after saving his girlfriend’s car. “I’ve got a bunch of metal in my throat so now I have to worry about going through metal detectors.”

Police say Payne pushed and punched an officer during his arrest. He is charged with aggravated motor vehicle theft, two counts of second-degree assault, resisting arrest, obstructing a police officer and third-degree trespassing.

According to the police report, Payne said he asked the passenger for a ride, and the she and an unknown driver picked him up. He alleged the driver fled the scene when Walden and Tippetts approached, and that he later ran because he was “nervous.”

But the passenger told officers that it was Payne who told her he “had a car and was coming to pick her up.”

Payne, 20, was suspended from the University of Colorado football program last spring for becoming academically ineligible and violating team policy.