Throughout Africa – at building sites, on the street, and at ports and airports – the Chinese presence is growing. 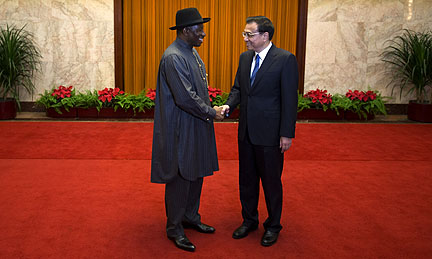 Competing for a slice of the wealth along with traditional stakeholders are new ones such as Brazil and South Korea – and India, China’s neighbour.

India suffered a humiliating military defeat at the hands of China in 1962 and has been wary of its intentions. The long-standing border dispute has been a major sticking point for the two countries.

With demand for resources to fuel both their growing economies rising, the contest between the two giants is playing out in different parts of the world. The campus of Nairobi University is one such place.

In a corner here, workers from the China Wu Yi company are working to build a futuristic 21-storey tower, complete with lecture halls, for up to 3,000 students and a helipad.

“Once it is finished in two years, this building will be the tallest structure around,” says Prof Sa Dequan, head of the university’s Chinese language and cultural teaching centre.

China Wu Yi was helped by the Chinese government to gain access to Kenya, but now it is handling 18 projects here.

Not long ago, it completed a section of the eight-lane, 50km Thika Superhighway, described as Kenya’s pride.

This kind of push by the Chinese government, say Indians, is helping their neighbour to steal a march on them.

“Indians have been in Kenya and this continent for more than 200 years. Why have they not developed the industry like the Chinese have done in the last 10 to 15 years?” asks Kenyan-born businessman Muljibhai Pindolia, who is of Indian descent.

He says the reason lies with the active involvement of Beijing. “With our own resources, we cannot develop the way those with government support can.”