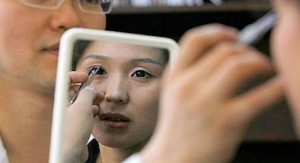 In the Western world, most people undergo cosmetic procedures like rhinoplasty, eye lifts and chin implants in their quest for a youthful and attractive appearance, but in China they are considered sure ways of improving one’s fortune and changing fate.

According to Mian Xiang, the ancient Chinese Art of Face Reading, a person’s facial features compared to their date of birth say a lot about their future. For example, small and sparse eyebrows show a lack of vitality and strength, whereas a hidden mole within the eyebrows indicates a successful break and monetary gain. A “double forehead” or a full prominent forehead means that person is very intelligent and has the capacity to retain a lot of information, while the bulbous end of the nose is called a “wealth palace” and its size and shape reveal a man’s ability to store wealth, and a woman’s chances of finding a rich and supportive husband. Basically the shape, size, placement and color of each facial feature is believed to reflect an individual’s health, personality traits, luck and future career prospects. In order to improve their chances of hitting it big in business, finding true love or improving their luck, many Chinese have their features altered according to the instructions of face reading masters.

In the United States and most other Western countries, people undergo rhinoplasty surgery to reduce the size of their nose, but a lot of aspiring businessmen in China choose to have their noses enlarged to become even more successful. A high, straight and prominent nose is considered the ideal feature for monetary gain. Unfortunately, according to face reading experts, other facial faults may suppress a person’s luck until the age of 41, but after that the nose takes over and they can expect an increase in riches. Eye lifts to straighten the eyes and make them more aggressive are believed to increase a person’s authority and their ability to run big companies, while tattooing the eyebrows to make them look long and bushy inspires strength and vitality.

Although plastic surgery is also used for cosmetic purposes, many Chinese have procedures done for more practical reasons as having a Feng Shui face is considered a great way to change one’s fate and improve their life. But the Chinese aren’t the only ones who believe changing their physical features also changes their destiny. In Japan, many believe altering their palm lines will help them extend their life, find love and gain wealth.