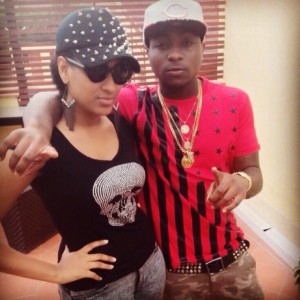 Controversial actress and model, Juliet Ibrahim seems to have a thing for appearing in music videos.

I wouldn’t call her a video vixen because she way past that.

Anyways, the beautiful actress was spotted alongside Davido while on set for the video shoot of his new single which was released two days ago – 13th, August, 2013.

The Omo Baba Olowo, Davido also confirmed that the video to the single would be out real soon.

Davido has a record of having a video for every one of his singles and they are always top notch, hence we all know what to expect!!