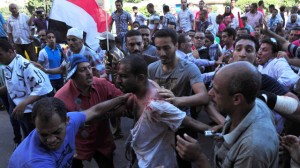 Egyptian authorities rounded up more than 1,000 people as the Muslim Brotherhood leadership defiantly called a week of nationwide protests starting on Saturday after a day of carnage.

The son of Muslim Brotherhood leader Mohammad Badie was among those killed in Cairo during Friday’s “Day of Rage” protests, the Brotherhood’s Freedom and Justice Party said on Saturday.

Ammar Badie, 38, died of a bullet wound sustained while taking part in protests in Ramses Square, it said on its Facebook page.

The death toll in Friday’s clashes rose to 173 nationwide, with 1,330 people injured in the fighting, government spokesman Sharif Shawki said on Saturday.

After Friday’s bloodshed, tensions were high with supporters of ousted Islamist President Mohammad Mursi in a Cairo mosque where bodies had been taken during the violence, while security forces were stationed outside.

The interior ministry said that 1,004 Muslim Brotherhood “elements” had been arrested, accusing members of Mursi’s movement of committing acts of terrorism during the clashes, which took the death toll to 700 since Wednesday.

The Brotherhood, which ruled Egypt for a year until the army removed Mursi on July 3, urged its supporters back onto the streets to denounce the military takeover and the subsequent crackdown on followers of the nation’s first freely-elected president.

“Our rejection of the coup regime has become an Islamic, national and ethical obligation that we can never abandon,” said the Brotherhood, which has accused the military of plotting the downfall of Mursi last month to regain the levers of power.

Egyptian Prime Minister Hazem Al Beblawi has proposed the legal dissolution of the Muslim Brotherhood and the idea is being studied by the government, a government spokesman said.

Beblawi had made the proposal to the minister of social affairs – the ministry responsible for licensing non-governmental organisations said.

Many Western allies have denounced the killings, including the United States, but Saudi Arabia threw its weight behind the army-backed government on Friday, accusing its old foe the Muslim Brotherhood of trying to destabilise Egypt.

Violence erupted across Egypt after the Brotherhood, which has deep roots in the provinces, called for a ‘Day of Rage’.

Automatic gunfire echoed around the capital throughout Friday afternoon, army helicopters swooped over roof tops and at least one office block was set ablaze, lighting up the night sky long after the violence had subsided.

The Brotherhood announced a series of daily rallies over the next six days, starting on Saturday.

“We will not leave the squares. And we will not be silent over our rights ever,” said Cairo resident Abdullah Abdul Fattah, adding that he was not a Brotherhood voter. “We are here because of our brothers who died,” he said.

An interim cabinet, installed by the army after it removed Mursi during rallies against his often chaotic rule, has refused to back down. It has authorised police to use live ammunition to defend themselves and state installations.

After weeks of futile, political mediation, police moved on Wednesday to clear two Brotherhood protest sit-ins in Cairo. Almost 600 people, most of them Islamists, were killed in the mayhem.

With no compromise in sight, the most populous Arab nation — which is often seen as leading events in the entire region — looks increasingly polarised and angry.

“Egypt fighting terrorism,” said a new logo plastered on state television, reflecting tougher language in the local media that was once reserved for militant groups such as Al Qaida. The government said in a statement it was confronting the “Muslim Brotherhood’s terrorist plan”.

Undermining Brotherhood pledges of peaceful resistance, armed men were seen firing from the ranks of pro-Mursi supporters in Cairo on Friday.

A security official said at least 24 policemen had died over the past 24 hours and 15 police stations attacked. The Brotherhood suggested the gunmen had been planted by the security forces, saying it remained committed to non-violence.

Witnesses also said Mursi backers had ransacked a Catholic church and set fire to an Anglican church in the city of Malawi. The Brotherhood, which has been accused of inciting anti-Christian sentiment, denies targeting churches. Christians make up roughly 10 per cent of Egypt’s 84 million population and the Coptic Church authority issued a statement on Friday saying it “strongly supports the Egyptian police and armed forces”.

The streets of Cairo fell quiet after nightfall on Friday, with the government warning the dusk-to-dawn curfew would be vigorously enforced. Neighbourhood watch schemes sprouted up, and residents stopped and searched cars driving past their communities.

Egypt has lurched from one crisis to another since the downfall of the autocratic Hosni Mubarak in 2011, dealing repeated blows to the economy, particularly tourism. A number of tour operators have suspended all holidays to Egypt until at least next month and the United States has urged its citizens to leave the country.

The European Union asked its states to consider “appropriate measures” to take in reaction to the violence, while Germany said it was reconsidering its ties.