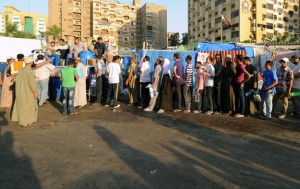 Pro-Morsi protesters have staged fresh rallies, raising fears of renewed violence amid warnings from the interim government that police will disperse them soon.

Supporters of the deposed Egyptian President began their marches after prayers on Friday, pouring out of several Cairo mosques and heading towards their key Rabaa al-Adawiya protest site.

They called for the reinstatement of Morsi after his removal by the Egyptian armed forces following massive protests against his rule and against his party, the Muslim Brotherhood.

On Friday, thousands of protesters chanted “down with [the Commander of Armed Forces] Sisi, Morsi is our president,” as they waved Egyptian flags and posters of the deposed leader.

In the 6th October suburb of the capital, police fired tear gas in to disperse Morsi’s supporters after they tried to storm the Media Production City, where satellite television channels are based, a security official told AFP news agency.

A security forces helicopter flew over head as ambulances sped into the area, and protesters threw gas cannisters back towards the police, an AFP correspondent said.

The latest demonstrations were a direct rebuke to authorities who have urged protesters to “let reason prevail” and end weeks-long rallies.

State television on Friday said security authorities will impose a siege over the protest camps Morsi’s supporters, a step before clearing them.

The siege at two Cairo sit-in sites, Rabaa al-Adawiya and Nahda squares, will begin within 48 hours, Egypt TV reported. It said authorities will let people leave, but not allow anyone else in.

The stand-off raises fears of new violence. More than 250 people have been killed since Morsi’s ouster.