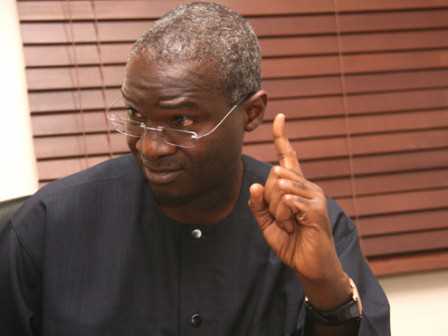 Lagos State Governor, Babatunde Fashola has warned his Governor Peter Obi of Anambra not to incite the Igbos against the Lagos state government, following the recent resettlement of some Igbo destitute to Onitsha.

Speaking with newsmen, Thursday,Fashola, after inspecting the on-going light rail project and Jetties in Mile 2 area of Lagos, Fashola accused Obi of playing politics with the matter and using the media to blow the issue out of proportion.

He expressed his disappointment at not receiving a call from Gov Obi before he turned the issue into a media issue.

“And I hope that common sense will prevail here. Also those who are baying for blood should know that there is too much at risk here. When I get a formal complaint from the government of Anambra State or notification from the Presidency, I will lay the facts bare.

“It is unfortunate that my colleague governor has made this a media issue. As I speak, I haven’t received any telephone call or letter from him to complain and I don’t think that is the way government works. On less important matters like this, he had called me before,” he stated.

According to Fashola “this is a political season and Anambra will be up for contest and in a political season, unusual things happen and perhaps we are living in an interesting times. And some of the evidence was when one see two adults kissing on television, it tells you that some things are afoot.”

Fashola described as regrettable the way issues of governance has been trivialized or tried on the pages of newspaper.

Reacting to Anambra governor reporting him to the presidency on the issue, Fashola said he was not aware if there was any place in the constitution that gave the president powers to adjudicate in disputes between states.

“Yes, I know that the president has a moral authority because he is the head of the sovereign state of the country. But I am not aware that the constitution states that the dispute between states should be settled by the Presidency.

“If Anambra State has an issue on this matter, and they feel aggrieved, they should call or write to us. I feel that the final arbiter should be the court. And it is really important to say that our hospitality in Lagos state is legendary. And it is a global legend that the people of Lagos State are hospitable people and so is the present government of the state and previous administrations,” he said.

Fashola stated that there is a large Igbo population in the state involved in many commercial activities, doing their business peacefully while the state government is working tirelessly to provide the required transport system, that would help improve the travel time and their businesses.