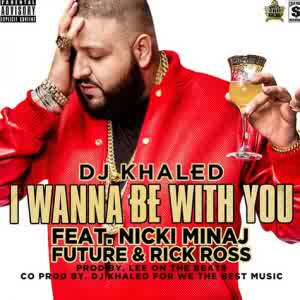 Famous Entertainer DJ Khaled has opened up in an interview with TT Torrez, Richmond’s iPower 92.1 radio, about his proposal to Nicki Minaj and ladies everywhere. “Ladies, I wanna be with you, for real, though,” he said.

“I Wanna Be With You” is just the name of his new single featuring Rick Ross, Future and the object of his first public proposal, Nicki Minaj.

“This record is my second single and it’s like the biggest talk of the country right now,” said Khaled, referring to his elaborate marketing scheme to reveal the “No New Friends” follow up.

Last week, Khaled stunned the entertainment world when he appeared on MTV with a 10-carat diamond ring and told Nicki that he loves her, he likes her and he wants to marry her.

“We got the same symptoms,” he said. “We both suffering from success.” Suffering From Success happens to be the name of his seventh studio album, slated for a Sept. 24 release.

“The proposal, I just wanted to show love and connect the fans to the new record,” he told TT. ” … I was just joking, it was having fun. We be so busy making these big hits, I wanted to come up with a dope plan to present the next smash record.”

Nicki got a good laugh out of it; and Khaled, he said he’s now getting calls for acting gigs.
“You know I want to get in the movies and all that,” he said.
As for that diamond, “I’m just gonna add that diamond to one of my pinky rings or one of my necklaces, you know what I’m saying?”