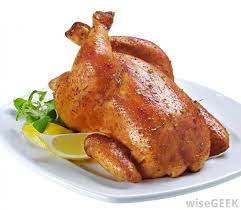 Julia Child did it and, according to recent studies, so do about 90 percent of people: rinse their raw birds before cooking.

The idea is to get rid of bacteria that may cause food-borne illness like salmonella.

But a food safety researcher at Drexel University wants you to stop -now.

Jennifer Quinlan, who conducted a study as part of a research project funded by the U.S. Department of Agriculture, says that washing your raw poultry actually increases the chance of spreading the bacteria around the kitchen.

“It does not get rid of the bacteria, it does not kill the bacteria. However, there is a chance that it will spray that bacteria called aerosolization,” Quinlan said in a video as part of a new public service campaign to stop the practice.

According to Quinlan, as many as 90 percent of people rinse their raw birds. That’s not surprising since many recipes actually call for you to wash the chicken and pat dry with paper towels.

The origin of the practice stems from some who like to wash away the sliminess that can come with commercial packaging. Others wipe the raw birds with vinegar or rub it with lemon. All these practices are not recommended by the USDA. Instead, you should make sure you clean your knives, cutting boards and other surfaces –and don’t let raw poultry or its juices touch other foods.

Got more questions about how to handle your raw poultry, check out what else is recommend by the USDA.