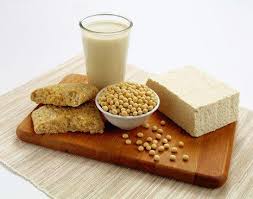 More often than not, when you have the opportunity to speak with aged people — say, people in their 80s, the most important question that usually comes to mind is the secret of their longevity, especially in this part of the world where life expectancy is less than 50.

One thing usually stands out in their answers, and it’s the fact that they eat more plant foods and less of animal protein — in addition to other healthy habits that they have maintained over the years, such as not smoking, and not taking alcoholic or sugary beverages.

And in these days of ‘preventive medicine’ which aims at nipping diseases in the bud before they find time to thrive in the human body, physicians also encourage us to dump junk and processed foods in favour of natural, lightly cooked foods.

There are many foods which, when taken in reasonable quantity, can yield maximum health benefits in a lifetime. One of such foods is soya beans, which nutritionists describe as not only versatile but also nutritional in many ways than one.

Consultant nutritionist, Dr. Simeon Oladimeji, notes that soya could be eaten as a meal, or processed into oil to make what is popularly known as soya bean oil; it can be made into flour for variety of foods such as bread and cake. And it can also be used to enrich local staples such as amala, tuwo, semovita/semolina, masaraand lafun (cassava flour).

The online portal, whfoods.com, writes that soya could be processed into dairy foods such as milk, cheese and yoghurt; or you could have soya burger and soya ice cream. For vegetarians and vegans, soya also comes handy as meat substitute, such as the protein-rich tofu (soft cheese-like food).

Soya beans could also be made into truly nourishing baby formula, experts say. And, as animal feeds, scientists say soya could be processed into non-fattening animal feed for poultry, livestock and aquatic animals such as fish.

Scientists say that in regions where people are severely malnourished due to lack of access to nourishing foods, consuming soya-based meals will not only reverse the health implications of malnutrition, it will also restore good health and help in maintaining sound health as the victim continues to eat the meals.

This much is confirmed by scientists at the World Initiative for Soya in Human Health. The WISHH scientists enthuse, “Bringing soya protein to the over 800 million undernourished people worldwide, including 200 million children, can make a difference in lives today and in the future. This is because soya is well suited to provide the protein, calories and other nutritional needs of such people.”

They explain further that in a study, they discovered that people who ate soya-based meals showed evidence of lowered blood pressure, and also had improvements in their blood vessels, such as greater elasticity of artery walls.

“Also, there was evidence of reduced risk of osteoporosis, protection against various cancers, including those of the breast, colon, prostate and skin; and in the management of endometriosis,” the researchers say.

Again, the Marketing Manager of All Tech Nutrients Limited, a food additives and concentrates company, Mr. Chimezie Obialor, says scientific researchers have shown variously that eating soya-based meals can reduce the risk of some health problems, including coronary heart disease.

“This is because soya beans contain hormone-like substances called phytoestrogens that mimic the action of the hormone oestrogen. As such, health benefits for menopausal women may include fewer hot flushes and lowered risk of osteoporosis,” Obialor says.

Nutritionist Oladimeji says this is because whole soya foods such as soya milk, soya yoghurt, soya bread and tofu are high in phytoestrogens — oestrogen-like chemicals found in plant foods.

Men who live in mortal fear of alopecia (hair loss) and prostate cancer also have some hope in soya beans, experts say.

According to a study published in the journal Biology of Reproduction, both prostate cancer and hair loss in men can be prevented by consuming soya products. The researchers say this is because eating soya-based foods leads to the creation of a unique molecule in the intestines called equol.

Scientists also found that when men eat soya meals regularly, the isoflavones found in soya can help in lowering incidence of prostate cancer.

Indeed, a study of human prostate cancer cells demonstrated that isoflavones block cell cycling, thereby helping to protect the body from the proliferation of cancerous cells in the prostate.

Apart from tofu, another meat-replacement food that can be made from soya is tempeh (chunky, tender, fermented soybean ‘cake’). Oladimeji says tempeh is an excellent meal that people who have diabetes can count on.

The online portal, naturalnews.com, notes that the high protein and fibre in tempeh can help to stabilise blood sugar at healthy levels, making it an excellent choice for diabetics.

“Since diabetics are susceptible to atherosclerosis and heart disease, keeping cholesterol levels low with foods like tempeh may be useful for preventing these problems,” nutritionists say.

They also reveal that tempeh lowers high triglyceride levels. Physicians say triglycerides are a type of fat that the body generates, in part, when we take in too many calories than we actually need.

“High triglyceride level may lead to atherosclerosis (thickening of artery walls), which increases the risk of heart attack and stroke; while it may also cause inflammation of the pancreas — the gland that produces juices that help break down food and hormones that help control blood sugar levels. Eating the soya-based tempeh will help these organs to function optimally,” Obialor notes.

Oladimeji says by replacing meat and dairy with tofu and tempeh, alongside other soya foods, an individual can significantly improve his intake of folate, vitamin K, calcium, magnesium and iron.

He explains further, “At the same time, replacement of all meat and dairy with soya-based foods will lower your average cholesterol and saturated fat intake appreciably.”

As infant formula, physicians say, soya-based baby milk is good for babies. And while many mothers fear that their babies might not tolerate soya infant formula, researchers say many infants can outgrow their allergy, but that if the allergic reactions persist, the formula should be discontinued and medical help sought. They also warn that a baby that is allergic to soya might also be allergic to other foods in the legume family.

To get all the health benefits of soya, scientists advise, eat it fermented — that is after it may have been processed into the various types of foods that could be made from the wonder beans.