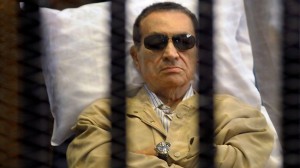 The release of former president of Egypt Hosni Mubarak has been ordered by a criminal court in Cairo, pending further investigation of corruption charges against him.

The ruling on Wednesday does not mean Mubarak will be immediately released: He will remain in prison for at least 48 hours pending a possible appeal by prosecutors, judicial sources said.

It also does not mean Mubarak has been acquitted on charges of taking about $11m worth of gifts from Al-Ahram, the state-run newspaper. But it removes the final legal hurdle blocking his release.

The 85-year-old former president was acquitted last week on charges of embezzling money from a fund earmarked for the upkeep of presidential palaces.

He is still facing retrial in connection with charges of killing protesters during the 2011 revolution. He was sentenced to life in prison last year, but a retrial was ordered earlier this year.

Defense attorneys argued that the case against him was weak, something even the first presiding judge, Ahmed Refaat, acknowledged in his verdict: He said there was no direct evidence that Mubarak ordered the killings, but found him guilty of failing to stop the violence.

His next court hearing is scheduled for August 25.

If Mubarak is freed later this week, it would come only six weeks after the armed forces that he once commanded deposed his freely elected successor, the Muslim Brotherhood’s Mohamed Morsi.

Morsi remains in custody since the army toppled him on July 3, but his supporters have held protests calling for his reinstatement.

Mubarak ruled from 1981 until he was toppled by protesters in February of 2011. [Al Jazeera]