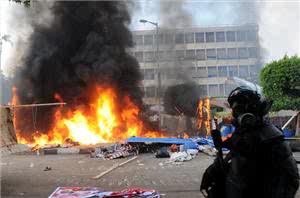 Authorities have declared a state of emergency across Egypt, as security forces and supporters of deposed president Mohamed Morsi continue to clash around the country and death toll hits 149.

The announcement on Wednesday came amid a deadly crackdown by security forces on two pro-Morsi protest camps in Cairo.

Some members of Morsi’s Muslim Brotherhood said the death toll was much higher than the 149 the health ministry released.

The state of emergency began at 4pm local time (14:00 GMT) and will last for a month, the presidency said in a statement.

The exceptional measures were taken as “the security and order of the nation face danger due to deliberate sabotage, and attacks on public and private buildings and the loss of life by extremist groups,” the presidency said.

The interior ministry said that several police cars were burned in Beni Suef, south of Cairo, and that protesters also set fire to the courthouse.

Local media reported that the main Coptic Christian church in Sohag, in southern Egypt, was burned, and a church in Minya was also set on fire.

There has been a great deal of sectarian rhetoric directed at Copts in recent weeks during pro-Morsi protests, leading to several incidents of churches burned and Christian-owned businesses attacked.

Interim president Adly Mansour “has tasked the armed forces, in cooperation with the police, to take all necessary measures to maintain security and order and to protect public and private property and the lives of citizens”.

Interim vice president Mohamed ElBaradei resigned following Wednesday’s violence, saying in a letter to the country’s leadership that there were peaceful options for ending the political crisis.

The Interior Ministry said 543 pro-Morsi supporters were arrested nationwide, in incidents related to dispersing the sit-ins of Rabaa and Nahda. The arrests were made for possession of arms including automatic weapons, and large amounts of ammunition.

Asmaa Beltagi, 17-year-old daughter of Mohammad Beltagi, the head of the Muslim Brotherhood’s Freedom and Justice party was reportedly shot and killed in the Rabaa al-Adawiya sit-in in Nasr City.

Two journalists were also killed while covering the violence. Mick Deane, a cameraman for the UK-based Sky News channel, and Habiba Abd Elaziz, a reporter for the UAE-based Xpress newspaper, died from gunshot wounds.

In an afternoon press conference, the cabinet media adviser thanked the security forces for “exercising self-control and high-level professionalism in dispersing the sit-ins,” and held the Muslim Brotherhood responsible for “escalation and violence”, after the sit-in at Nahda Square was dispersed.

Witnesses said that after firing tear gas into the Rabaa al-Adawiya sit-in, pandemonium struck among the thousands of protesters who had set up camp there soon after Morsi was ousted by the army on July 3.

The United States government has condemned the attack of the Egyptian army on protesters and the subsequent declaration of state of emergency.