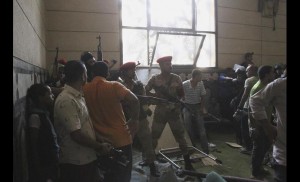 Egypt’s Muslim Brotherhood has called for fresh demonstrations after police ended a tense standoff with protesters in a Cairo mosque.

A statement by the Anti-Coup Alliance said several marches would take place in the Egyptian capital on Sunday afternoon, continuing the daily campaign of protests in defiance of an intensifying crackdown.
Meanwhile, Egypt’s cabinet is set to discuss the crisis in the country.

Security forces on Saturday dragged Muslim Brotherhood supporters of Mohamed Morsi, the deposed president, from the Fateh Mosque, passing through angry crowds who called them “terrorists” and tried to beat them.

Authorities later said about 250 protesters were being investigated for murder, attempted murder and so-called “terrorism”.

The Egyptian Interior Ministry said it had arrested 1,004 Brotherhood “elements” during the unrest, and on Saturday security sources said the brother of Ayman al-Zawahiri, the al-Qaeda chief, had been detained.

The clashes came as the government said the death toll from violence natiowide had risen to more than 750 since Wednesday, when police cleared two camps of Morsi loyalists in Cairo.

In a related development, Adly Mansour, the interim president, has put forward a proposal to legally dissolve the Muslim Brotherhood.

Its members are also supporters of Morsi, whose overthrow on July 3 as president prompted the Cairo sit-ins.

Meanwhile, international criticism of the bloodshed has mounted, with Germany and Qatar jointly condemning the “brutal violence” and Ban Ki-moon, the UN chief, urging “maximum restraint” and “de-escalation” at what he termed a “dangerous moment” for Egypt.