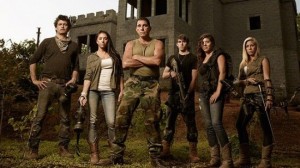 Brent Sr. believes the apocalypse will be triggered by a strong electromagnetic pulse, or an EMP, that will take out the entire power grid, plunging mankind back into the Dark Ages. To prepare for the inevitable, he and his family are building a fortified castle complete with a drawbridge, portcullis and an underground bunker.

Atop a large foothill deep in the woods of North Carolina, a family of doomsday preppers are getting ready for the impending end of days. They are learning to use medieval weapons like crossbows and catapults, and building a fortified castle that will protect them from marauders and scavengers. Brent Sr., a retired infantry officer, got into doomsday prepping back in 1999, convinced that the predicted Y2K computer glitch would unleash chaos and bring about the end of civilization as we know it. Worried that the computers which controlled everything from electricity to natural gas would go down, he wanted to ensure his family’s safety if everything went dark. When that didn’t happen, Brent put the whole thing out of his mind for a couple of years because he didn’t want people to think he was crazy, but he eventually got back to the original plan. Only this time he has his whole family helping him

Soon after Y2K, Brent Sr. drafted his children into helping him build the super-fortress of his dreams. He now believes the world as we know it will come to an end as a result of an EMP that will be caused either by a nuclear explosion or a solar flare similar to the one that occurred in 1859. That’s why a medieval castle, where electricity is not needed to survive seemed like the perfect choice for a shelter. When his worst fears finally come true and it’s every man for himself, the Doomsday Castle will be the only thing keeping marauders at bay. His kids are unsure the end will actually come during their lifetime, but they just want to be prepared, and joke that even if there is no doomsday, at least they’ll all have a “nice vacation house.” But prepping is no joke to Brent Sr., and he has set up a 100-year trust so the castle can’t be sold if something were to happen to him. “Each kid will get the castle for five weeks every year,” he said during an interview with LiveScience.

Brent and his family are now the protagonists of National Geographic Channel’s “Doomsday Castle“, a non-scripted reality show that premiered on August 13. It was Brent’s son, Brent II, who contacted the casting directors of Doomsday Preppers, and told them they were building the castle. “When I first told my dad, he nearly disowned me,” he says. ” But I kept working on him, and he eventually agreed that it’d be good to get this message about prepping out there.” The builders didn’t want to disclose their full names for fear of curious or hostile fans showing up at their castle door.