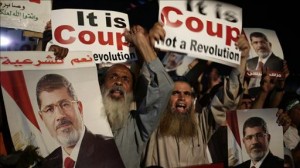 Western envoys intervention is showing signs of yielding fruits as they try to head off more bloodshed.

Egypt’s army-backed rulers and allies of deposed President Mohamed Morsi have given the first signs of a readiness to compromise.

Recognising for the first time the strength of popular protest against his one-year rule, Morsi’s allies said on Saturday they respected the demands of millions who took to the streets before his overthrow.

Interim Foreign Minister Nabil Fahmy, also on Saturday offered an “open invitation” for all groups to take part in a road map for reconciliation but first called for an end to violence.

Fahmy’s comments came as Egyptian police called on supporters of Morsi to abandon their protest sit-ins, saying it would pave the way for his Muslim Brotherhood to return to a normal role in the country’s political process. But Morsi’s supporters would hear none of that as they vowed to continue protesting until he’s reinstated.

Meanwhile, backers of Morsi on Saturday carried on with their weeks-long rallies in two encampments in Cairo.

Tarek El-Malt, a spokesperson for the pro-Morsi bloc, said on Saturday his group wanted a solution that would “respect all popular desires”, while rejecting any role for the army chief Abdul Fattah al-Sisi, who led the overthrow of Morsi, in any political deal.

El-Malt said that these messages have been given at talks on Saturday in Cairo with US Deputy Secretary of State William Burns and European Union envoy Bernadino Leon.