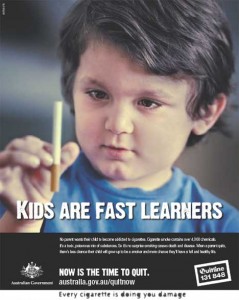 After Australia’s Prime Minister Kevin Rudd’s $5 a pack tax rise slapped on smokers, cancer experts want them to apply for a licence to smoke.

Retailers would have to check the licence before every sale to verify that every pack sold is purchased by an adult, the authors write in today’s Medical Journal of Australia.

Even though it is illegal in all Australian states and territories to sell tobacco to anyone under 18 – 2.5 per cent of adolescents aged 12-17 years are daily smokers and another 1.3 per cent smoke less frequently.

Thirty-one per cent of the tobacco smoked by adolescents was purchased from retailers or directly over the internet, the 2010 National Drug Strategy Household Survey found.

“Even if a smoker’s licence results in some increase in secondary purchasing by adults for children, the overall reduction in access by minors would be substantial and could eclipse any other single tobacco control measure currently under consideration”, they say.

Magnusson and Currow also want the smart cards to be used to collect data on smokers that can be used to help them quit.

“It will enable rigorous evaluation of smoking cessation programs, ensuring that public health dollars are focused on evidence-based strategies that yield the best returns,” they say.

A smart-card licence would also allow the government to see if smokers’ purchasing behaviour changed in response to industry incentives such as retail price discounts.

The authors reject arguments that the licence would attach a stigma to smoking by making smokers to feel like “registered addicts”.

Instead, they argue smoker’s licence would protects choice, “it does not impose a smoke-free lifestyle on adults who cannot, or who choose not to, give up”.

The Federal Government wants to reduce the smoking rate from 16 to 10 per cent by 2018.

Last year it introduced controversial plain packaging rules that mean all tobacco must be sold in drab, brown packaging with health warnings covering 75 per cent of the pack.

Last week Prime Minister Kevin Rudd announced it would raise the tobacco tax four times over the next four years to raise $1.3 billion.

The public health cost of smoking is estimated to be more than $30 billion a year, killing 15,000 people annually.