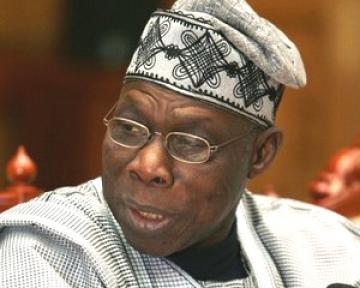 “If Nigerians were yet to commend a leader after 53 years of independence, then we are jinxed and cursed; we should all go to hell.” These were the very words of former President Olusegun Obasanjo few days back during a presentation at the 4th Annual Ibadan sustainable Development Summit at University of Ibadan, Oyo State. The ex-Head of State condemned the younger generation of leaders in the country, saying that they lack integrity and probity and have failed their people woefully.

Ever since the former president delivered his damning, magisterial verdict, public reaction to his pronouncement has been rather varied. In the main, most Nigerians have hailed President Obasanjo for his unfailing outspokenness and his uncompromising rendition of truth however unsavoury and disagreeable it might sound. However, what is not readily acknowledged by most Nigerians in their readings about some of our leaders’ comments and actions is that appearance is not necessarily reality and that what we so hurriedly construe to mean the fact could eventually turn out to become a farce.

In this treatise, I seek to add some analytic flesh to the dry bones of Obasanjo’s comment. To be sure, I totally agree with Obasanjo that our (younger) leaders have failed their people agonizingly; I agree with him that we should all take a journey to hell! Nevertheless, I seek to use this auspicious medium to imprint on the consciousness of Nigerians the fact that, in the event that we all set out for hell, no other leader – dead or alive – in the entire history of Nigeria is more deserving of being the captain of the excursion to hell than Obasanjo himself. by the same token, no other leader merits the privilege of presenting a letter of credence to the devil than the former Head of State, Olusegun Obasanjo.

One of the tragic demerits of the approach so often adopted by most Nigerians in assessing the performance of their leaders is the tendency to treat leadership as an isolated event rather than a continuum. At such, in decrying the shortfalls of an incumbent regime, we de-historicize our analysis by failing to establish the critical linkage between the past and the present, between the failings of present leadership and the willful (and often costly) miscarriages of preceding leaderships. It is this inclination to condemn the present by denying the past that has provided ex-President Obasanjo the ammunition to be pissing in the wind by condemning Nigerians and their leaders.

One of the hallmarks of true leadership is the ability to ensure that one’s achievement of success outlives him. That is why it is said that “success without successor is failure in disguise.” Thankfully, Nelson Mandela’s qualification as a fitting example to this truism can hardly be disputed. His regime as Head of State in South Africa was as brief as a thunderbolt; yet, its impact and its legacies are as enduring and immutable as imprints engraved on a rocky surface. Today, South Africa has become the latest addition to the potpourri of countries our leaders, including Obasanjo himself, covet for leisure, tourism, sound healthcare and superlative education.

Paradoxically, we can hardly render the same testimony about our own self-acclaimed “father of modern Nigerian,” Chief Olusegun Obasanjo. If anything, Obasanjo personifies a dialectical negation of what leaders like Nelson Mandela represent. His relatively lengthy rulership (both as a military and civilian Head of State) has basically translated into a “Golgotha experience” for most Nigerians. What was Obasanjo’s record at instituting a credible process that will throw up a worthy successor who would ensure that Obasanjo’s legacies (if any) are not eclipsed by history. On this score, Obasanjo proved to be such an unpardonable disaster. Propelled by the desire to perpetuate himself in power during his second reign as civilian president, this imperial leader enthroned what could rightly pass as the worst specie of electoral rigging, using the infamous and highly villainous umpire, Maurice Iwu, as a legitimizing rubber-stamp, Elections under his tenure were characterized by violent breeches technically codified as “do or die affair.”

However disillusioned we might be today regarding the present government in power, the bitter, inescapable truth is that the umbilical cord of this present regime is deeply wired up in Obasanjo’s political abdomen. Incensed by the intransigence of Nigerians to kowtow to his third term bid, Obasanjo orchestrated a deliberate constriction of the democratic space by disallowing electoral competition especially within his party, muscling the aspiration of more credible candidates and dealing a devastating blow to the few who had that “balls” to dare him by invoking the talismanic, rigging expertise of Maurice Iwu. What was the end result: a sickly, departure lounge-seated President Umoru Yar’dua and his lucky, zoology-trained, leutenant – Goodluck Jonathan. How could the younger generation of leaders not fail?

If Obasanjo embodies the worst example of political succession, his footprints on the economic landscape of Nigeria is all the more ghastly. While hiding under the ideological subterfuge that “government has no business with business, only the private-sector can profitably run enterprises”, Obasanjo proceeded to rape what is left of Nigeria’s tottering economy by using privatization as a cover to engage in the criminal disposal of national assets. In case Nigerians have forgotten, it is an established fact that 80 percent of the 128 nationally-owned companies privatized during the regime of Obasanjo failed. Today, most of those privatized companies are nothing more than mere institutional carcasses.

In 2011, a Committee set up by the Senate to probe Obasanjo’s privatization programme turned in a startling report. Just two examples will suffice: The Aluminium Smelting Company (ALSCON), Ikot Abasi, which was set up with $3.2 billion, was sold to a Russian firm, Russai, for a paltry $130 million. Delta Steel Company, Aladja Delta State, which was built in 2005 by the Nigerian government at a cost of $1.5 was sold to Global Steel Infrastructure, a company believed to be fronting for Obasanjo and never submitted a bid, at a cost of $30 (Vanguard Newspaper: August 18, 2011).

In the guise of fighting economic corruption, Obasanjo ended up elevating corruption to the status of a state religion. Most of the notorious looters being pilloried today by Obasanjo were in fact firmly incubated during his regime as Nigeria’s civilian president. As Sonala Olumhense had observed, “Obasanjo boisterously invokes such names as James Ibori, Tinubu and Igbinedion, but conveniently forgets that in 2006, he ignored a report he had commissioned and refused to prosecute 15 indicted governors, including those three.”

Perhaps, the worst of Obasanjo’s economic treachery and the most heinous of his disservice to Nigerians was the shoddiness with which he managed the power sector and the spectacular failure that emanated therefrom. It remains an inexplicable scandal that Obasanjo spent about $16 billion dollars just to entrench country-wide darkness at a time when the country’s power-generating capacity was a miserable 2,000 megawatts. Just like his counterfeit privatization exercise, his electricity schemes were nothing more than conduit pipes for financial racketeering by an oligopolistic cabal.

What were the effects of these and many more atrocious legacies bequeathed by Obasanjo to younger generation of Nigerians? First, it created a culture of political brigandage which, till date, remains a defining attribute of our democracy. Nigerians will readily remember the notorious shenanigans of elements like Andy Uba in Anambra State and Pa Adedibu in Oyo state. Second, it crystallized a distorted, disarticulated economy characterized by rent-seeking, cronyism and dependency syndrome; an economy in which the exponential blossoming of a microscopic few runs side by side with the stupendous pauperization of an overwhelming majority.

Third, it institutionalized structural unemployment by decimating the vital foundations for job creation and entrepreneurship, namely: stable electricity, decent transport infrastructures, incentivization of the private sector, a hospitable political environment and a legal/regulatory framework that is clearly predictable, incorruptible and autonomous. Finally, it midwifed the induction of a teeming generation of younger Nigerians who had grown up to become faithless about the viability of the Nigerian project and have had to resort to brutish means for survival and self-actualization, hence, their portrayal as a failed generation by Obasanjo.

To sum up my points, if there is any leader that has failed its people, Obasanjo epitomizes a cardinal example of such failure. If Nigerians were yet to commend a leader after 53 years of nationhood, it is precisely because Obasanjo and his breed of predatory rulers have foreclosed such possibilities by driving a fatal nail in the coffin of good and exemplary leadership. And if we should all go to hell because we have failed as a people, then, Obasanjo should lead a one-man advance team to hell to prepare the ground, just as the biblical Moses dispatched 12 spies to Canaan to survey the Promised Land.