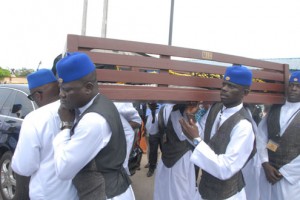 Governor of Lagos State, Babatunde Fashola this afternoon buried his late father, Alhaji Ademola Fashola, at the Vaults and Gardens Cemetery, Ikoyi, Lagos, following his demise on Monday at the age of 80 after a protracted illness.

A lying in state was later held in his honour at Surulere Senior Secondary School after his corpse had arrived at his Ladipo Labinjo Street, Surulere residence from the mortuary in black Merceses Benz SUV at about 11:55am.

Members of Eko Club who were also present at the lying in state, describing him as a jolly good fellow, with prayers that almighty Allah grant him aljannat firdaus.

Prayers were offered for the repose of his soul at the Lagos Central Mosque, Lagos Island before he was taken to the Vaults and Gardens for burial.

At the grave side, the Muslim clerics offered prayers for Pa Fashola’s repose and prayed God to grant him eternal rest before he was lowered to the grave in the presence of the governor, Babatunde Fashola and other siblings.

The burial was also witnessed by prominent Nigerians who came to pay their last respects to the deceased.