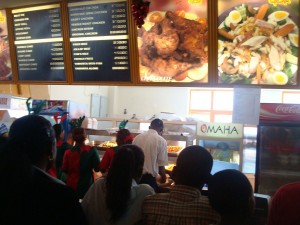 The Association of Fast Food and Confectioners of Nigeria, AFFCON, an umbrella body of Quick Service Restaurants, QSR in Nigeria, said it contributes an annual revenue of N200 billion into the growth of the economy, and its members have among other things, also paid over N1billion to various tiers of government in taxes and levies.

Addressing newsmen on the forthcoming inaugural National Conference of the association with theme: ‘The Role of Fast Food Business in the Global Economy,’ which is scheduled to hold in Lagos, by September 4, 2013, The President of the body, Mrs. Bose Ayeni said that the industry employs over 500,000 workers at processing and retailing levels, in addition to paying over one billion naira to the various tiers of government in taxes and levies.

Ayeni also said; “Food is at the top of Maslow’s hierarchy of needs. That buttresses the primacy of food in human existence. Life is not sustainable without food. With AFFCON, food becomes an experience to anticipate, enjoy and cherish, presented always in a cosy and hygienic environment.”

Ayeni who said that the Nigerian fast food industry is a significant contributor to the Nigerian economy, with an estimated annual revenue of N200 billion, and pays over N1 billion to the various tiers of government in taxes and levies, said the industry has a massive growth potential and is dominated by some 100 small-to medium –sized indigenous brands with over 800 outlets spread across have potential to become big given the right environment to thrive.

She however complained of the challenges faced by the industry, saying inadequate power supply tops the list, pointing out that about 30 percent of the gross profit made by the fast food companies is used to service power supply.

Another challenge she identified was the multiplicity of taxes and levies. “This is compounded by the overlapping functions of several regulatory agencies. These overlapping functions and a lack of coordination amongst such regulators lead to heavy financial burden on fast food companies. She however pleaded with government to ensure that the different regulators have distinct roles that do not overlap.”

She expressed hope that the industry would soon overcome its challenges, and contribute more to the growth of the country’s economy.