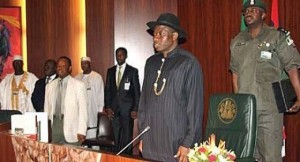 The federal government on Wednesday approved the sum of N125.626 billion for contracts to reconstruct five major critical roads and the procurement of six units of 40MVA 132/33 KV mobile substations for electricity supply.

The Minister of Information, Mr. Labaran Maku, along with his counterparts in the Ministries of Power, Works and Transport: Professor Chinedu Nebo, Mike Onolememem and Senator Idris Umar respectively, briefed journalists on the outcomes after the federal executive council meeting presided over by President Goodluck Jonathan in Abuja.

Minister of Works and Transport, Mike Onolememem explained that: “The Apapa-Oshodi road is a gateway to Apapa and Tincan Island ports and part of the Trans-West African highway (Coastal). It is therefore of immense economic importance to the country and the sub-region.

“Due to aging, the road had virtually collapsed and the damaging effects of heavy axle load vehicles carrying goods to and fro the ports. The drainage system had also collapsed.”

Power Minister Professor Chinedu Nebo presented a memo to the council seeking approval for the design, manufacture and supply of six units of 40MVA 132/33KV mobile substations worth N1.8 billion.

According to him, “In pursuits of the ongoing reinforcement of transmission substations nationwide, the Transmission Company of Nigeria (TCN) requires additional procurement of the 40 MVA 132/33 KV mobile substations for utilisation nationwide for the purpose of maintaining continuity of supply to consumers during major works at existing substations.”

“A total of 138 direct jobs would be created at the six sub stations and 1,380 indirect jobs as a result of the multiplier effects on the economy,” Nebo said.

The Federal Executive Council approved the memo, complete with spare parts and accessories, in favour of Messrs Liaoning Efacec Electrical Equipment Company Limited, in the sum of $10, 278, 650, payable at the prevailing exchange rate the time of payment and N247, 358, 795.85, for port clearing, transportation and VAT and with eight months delivery period.”