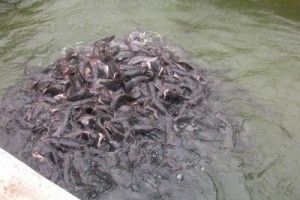 As the government continues to bolster other non-oil revenue sources in a bid to diversify the country’s economy, Minister of Agriculture and Rural Development, Dr Akinwumi Adesina has said that the Federal Government may soon place a total ban on the importation of fish and other aquatic consumables.

Speaking, Tuesday, in Ado-Ekiti, at the launch of the Special Growth Enhancement Support (GES) scheme for Fisheries and Aquaculture value chain, Adesina, however, said that the ban would be imposed, only if arrangements being put in place by the government to that effect worked as planned.

Represented at the occasion by the Federal Director of Fisheries, Mrs. Foluke Areola, the minister stressed that Nigeria had no business importing fish given its huge natural and renewable resources.

He said it was in view of this that the ministry was promoting increased fish production through the Aquaculture Value Chain. This is in pursuance of the goal of the Agricultural Transformation Agenda (ATA), he said

“The Value Chains are to create an enabling environment for increased and sustainable production of over one million tonnes of fish within the next four years, generate employment and pursue gradual reduction of fish imports.”

Under the four-year implementation plan, Adesina said the Aquaculture Value Chain, would increase the annual production of fingerlings in the country by 1.25 billion tonnes.

“Fish farming is a business venture with lots of potential investment opportunities and a veritable tool for increased fish production, poverty alleviation and sustainable livelihoods.”

The minister noted that the Aquaculture Value Chain had already been included in the Growth Enhancement Support (GES) scheme for 2013.

He said, under the scheme, inputs such as fish and other sea foods would be distributed to many Nigerian fish farmers.

Adesina therefore lauded the efforts of President Goodluck Jonathan and his administration’s initiative in transforming agriculture into a serious business venture as well as in ensuring adequate food security for Nigerians.

He announced that in an effort by government to protect local fish farmers operating in the country, measures had been put in place to curb illegal importation of fish.

Adesina said that the ministry was collaborating with officers and men of the Nigeria Customs Service in this regard, adding that the Federal Department of Fisheries had also been directed to ensure that the stoppage of importation of the banned fish inputs.

In his speech, Gov. Kayode Fayemi, who was represented by the Secretary to the State Government, Alhaji Ganiyu Owolabi, thanked the Federal Government for its benevolence.

He said the state government would support its policies and programmes on agriculture. [PMNEWS]